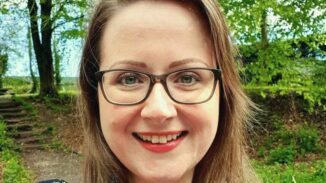 Listen to your body - act fast if concerned, learn the importance of rest, do what works for you, regardless of advice from others. Stay away from miracle 'cures' or health treatments - simply a waste of money, instead value the advice from your IBD team, they are there to help and support you and ultimately keep you well. Don't be scared to speak up and ask questions - be your own advocate.

I was diagnosed with Crohn’s when I was 18 after being ill for a few months with what I thought were sickness bugs. The beginning of my IBD journey was quite tough; I wasn’t responding to treatment and kept losing weight, my weight dropped to six stone and I lost my hair due to side effects of the medications. It took around four years of constant illness and medications/trials before things began to pick up and I was able to get back into education and employment. Things settled for a time with medication and I kept a very close eye on diet and lifestyle, but I was never without symptoms and still had the usual particularly bad days. I have never been without some form of maintenance medication to suppress the immune system to control the Crohn’s, including steroids which are used often to manage flare-ups and have many side effects to manage on top of IBD symptoms.

Thirteen years after diagnosis the Crohn’s became more active and I began immune suppressing biological drugs which are administered intravenously every few weeks at hospital. I was then diagnosed with an abdominal abscess caused by fistulating Crohn’s. A fistula is an abnormal connection between two hollow spaces such as blood vessels, intestines, or other hollow organs. They are usually caused by injury or surgery, but they can also result from an infection or inflammation. A fistula had formed from my bowel to my tummy under my belly button, creating an abscess which required surgical drainage and I then had a drain in situ for nine months. To try to avoid further invasive treatment and surgery, I was also put on Modulen, a medically specialised liquid diet designed to rest the bowel and provide all nutrition, so no other food at all, for 10 months, but the Crohn’s continued to take hold and the only option was surgery.

Last year, sixteen years after diagnosis, I had resection surgery to remove part of the bowel; this was initially to be via keyhole but once on the operating table the full complexity of the disease was seen and the result was open surgery and the formation of a temporary ileostomy (stoma), to rest the bowel further. I found this particularly challenging to deal with and I also had further health issues as the surgery found more fistulas, the most concerning joining to my bladder. I knew a stoma may be an option as all scenarios are discussed before you go into theatre, but waking up with one still came as a shock, mostly as I also woke up to discover I’d had open surgery, I found it a bit much to take in, and I also learned that I am quite squeamish!! I have been active in local support groups since my diagnosis and have friends with permanent stoma’s so I thought that I would be ok with it – I wasn’t! Initially I didn’t cope very well at all and it really impacted my confidence, I also felt guilt that I wasn’t dealing with the situation as well and as easily as I had anticipated I would/should. I struggled with body image after surgery, as well as mentally with concerns about further surgery and lifestyle impact/changes; my stoma was a bit more difficult to manage and I didn’t have a straight forward recovery; now though I am deliberating whether to go ahead with reversal surgery to remove the stoma and re-join the bowel, as the stoma has improved my quality of life and I am feeling the healthiest have in a long time. It’s something I need to discuss further with my IBD team and I have been back and forth with the decision myself repeatedly since my surgery. I know I am also very fortunate as many don’t even have the option to consider reversal surgery as they have a permanent stoma.

After surgery you are advised to name the stoma as a way of coming to terms with the change, many choose to use human names, or cutesy names and I know someone with a Bubbles! I wasn’t so positive and therefore mine is named ‘the thing’! Even though I’ve grown fond of ‘the thing’ now, I haven’t chosen to rename it, mainly because I’m not really one to name a body part and I found the whole thing odd from the get-go! But also as it reminds me of my journey and where I was at when it was formed. And, because I can talk openly when out in public and say I need to sort ‘the thing’ and no one takes notice, I find it more normal. I have always been quite open about my Crohn’s and having a stoma hasn’t changed that. I may not be showing off the bag publicly, but I have let others see it; from family and friends to curious work colleagues and acquaintances. It’s a part of who I am now, so I try my best to normalise stoma’s even a little bit and show that having a bag isn’t actually all that bad! Even though I have had surgery and now have a stoma I still get Crohn’s symptoms daily, such as fatigue, and bloating, and I now have the added stoma issue of hydration to manage too – it can be difficult to manage daily and some days are tougher than others, there is a new way of living to dealing with a stoma, but having the conversation normalises the situation and raises awareness of what ostomates handle daily.

I was due to have the stoma reversed six months after its formation, but I had a few setbacks with my recovery and so it’s still with me just over a year later! There is no time frame at the moment for when surgery will take place so I am taking life with the thing a day at a time, part of me will miss it when it goes! For now I just have to wait and see, which isn’t ideal for me as I’m a planner! So I am taking stock and enjoying life whilst I feel well as who knows when the next flare will hit and what it will bring.