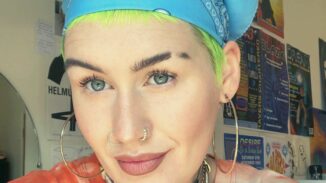 Talk. Make sure you have a trusted person in your circle to speak to. If you don't have that, seek outside help, via Samaritans, or search for a charity or support network that can help you. Go to the doctors and try to access a diagnosis, it can be difficult, but it is safe and from there you can assess what is best for you. Make sure you have a support network that can check in with you to ask the big little questions; Are you taking your medication? Are you going to counselling? How's it going? Having people that really care. That support system will keep you on track and take care of you when you need it most. (Try) To make an active effort to implement good health for yourself.

The start of my mental health journey was when I was very young. Being diagnosed with Perthes disease at around four years old and having hospital treatment for a long time. Perthes affects your joints, like elbows, knees and hips – mine affected my hip. My body was self-corroding so I couldn’t do weight bearing activities, including walking.

I had a carer during primary school, I was in a pram then a wheelchair until I was given the all clear at nine years old. It was pretty much a normal childhood, but I remember having a Zimmer frame and refusing to use it. I was so aware of myself. I believed being disabled meant I had to work so much harder to be a well-rounded person – in my achievements, and in being funny, being cool.

I had this overwhelming drive to be successful and to be liked and to be loved and appreciated. Which is normal but it got warped. I felt a deep sense of not feeling good enough which followed me through the rest of my life. It sparked intense perfectionistic tendencies from a young age.

Even though I had a wonderful family, I was very depressed. I turned to eating and was overweight because I couldn’t exercise and because of my body type. This developed into a compulsive eating disorder. I turned to food for emotional comfort, control or a sense of relief. I was very secretive, sneaking into the kitchen and eating full packets of things to be told off by my parents. I didn’t understand that it was something deeper than just eating.

As we now know – eating disorders are not just about body image, but about control – for me it was both. I was aware of my appearance and couldn’t wear the same clothes as other girls because I was awkward, my body developed earlier than other girls.

Aged 11 I started high school, moved from a small country town to the city, and began developing a massive sense of self-hatred. I had parents who believed in me and loved me – but were very weight orientated, part of this I think was because of a family relative whose weight was a debilitating factor in her life.

There were many comments about my weight made by my family. As an adult I understand that came from a place of love and of fear but as a child it made me think I was not good enough and needed to be better. I thrived academically, did well in sport and had loads of friends, but I was miserable and struggled massively with panic attacks and deep senses of fear.

I was desperate to fit in. As I got older I kind of realised that being academic and succeeding in that way was not enough. I also had to be beautiful, pretty and attractive to men and to boys, to girls, to be socially accepted. I was about 13 or 14 when something inside me flipped. It was a decisive moment. I was going to lose weight and be liked. That decision was such a strong hold on my life, it gave me control.

Being from an incredibly academic family I would describe myself as intelligent but not necessarily an academic. I’m a designer, an artist, a creative. I was always encouraged in that by my family, but academia was always pushed – it’s received more widely. So, from feeling I had started behind, I worked harder.

I would go to school, go straight to hockey practice, take the bus home and go straight to the gym as a 15-year-old. I started cycles of making myself sick and compulsively exercising. Within eight months I was on a really strict diet and lost a fair sum of weight. I was getting so many compliments about how great I looked – but it further re-affirmed to me that I am more widely accepted and loved when I am thin. Which is not okay, but it made me think if I could lose two stone – I could probably lose more. I starved myself and was completely obsessed with my diet.

Going to friends’ houses for movie night I would bring a banana and cereal bar whilst they had chocolate, popcorn and Doritos. They would ask why I wouldn’t join in. I couldn’t articulate it. How hard it was, to sustain this lifestyle to be loved. They could eat what they wanted and still be skinny – I couldn’t. This put a massive strain on my relationships.

I went from a UK size 16-18 to size 8. At the time I wasn’t aware of body dysmorphia. We got all dressed up for new years on a winter ski trip, and I just wanted to go home and hide – even though I was the thinnest I have ever been. I spent the entire night post-meal in my room, crying.

You can only sustain these things for so long. During my A-levels I gained all the weight back and more. My friendships were straining, and I was dumped by a guy who had said to his friends that I was too fat. I couldn’t win.

The perfectionistic tendencies weren’t being addressed at all. I was extremely depressed and experiencing massive panic attacks. I isolated myself in my room for days, cutting off friends and schoolwork. I didn’t have a social life outside of extracurricular activities.

It wasn’t until the year later, my mum came to me and talked about my weight fluctuating constantly and when I was quite overweight she said: “If you can tell me that as you are, at this weight, that you’re happy and you’re healthy and you’re loving life, then I don’t care. But I know you and I know when you’re operating in this way, that you’re not at a healthy place in your mind.”?

We made a pact to work on healthier ways to combat these compulsive eating disorders and to deal with the deeper things making me react in this way.

However, things started going wrong. I was on holiday before university began and I was groped. I then went on to work in a restaurant where I was sexually assaulted and mentally abused by a chief that worked there. I had no support around me to help me deal with that hurt.

There was a guy I had been dating and was romantically involved with – we had a deep connection. He died, and I had never dealt with grief before. He was 26, and I did not know how to deal with that. I think in the build up to my breakdown, that was where the snowball started turning. I was completely broken. We hadn’t ended on good terms and it was a horrible time.

Although I had been doing well with the eating disorder side of things, depression, anxiety and panic attacks took hold of me. I had started university suffering deep depression. I was trying to figure out who I was and my worth as a human.

I was studying and working at the same time. I felt so stressed and overworked, my job me miss a lot of university, which meant I couldn’t catch up and put me under even more pressure. It was a lifetime of uncontrollable impulses and depression and it bubbled over to a place of a mental breakdown. I couldn’t eat, I stayed in bed. I couldn’t articulate to my friends what was happening. When I did, they didn’t know how to respond. I felt I couldn’t find people that really understood, I felt really alone.

I spent another full weekend alone in bed and I text my mum “I need you to come get me now”? and I think she understood exactly what was happening from that.

She came, packed a bag for me and brought me home. I couldn’t finish the semester as University, I didn’t see anyone for two whole months. Except doctor’s appointments and the odd walks I didn’t do anything, I was so low.

I was very lucky that my tutors gave me a predictive grade, and my mother talked me into counselling.

Counselling was when things turned around for me.

With mental health – there isn’t a real hallelujah moment where everything gets magically better.
But counselling gave me a space to speak to somebody that didn’t know me, who didn’t know my family and I didn’t have to justify anything. I just had to state it. It was really healthy and really lovely. It was very emotionally heavy, but it was extremely healing. It was hard – but it did get better.

I took a year out of University to work for modelling agency. I was sexually harassed, and mentally and emotionally abused and manipulated. It completely ruined me. It ruined my perception of my worth, my sexuality, my appearance and my eating.

I threw myself into my work again – patterns here – It was an amazing time, but also an incredibly turbulent time. I turned to men and relationships, to make me feel like a woman and to try and feel validated after that kind of abuse. I’m still trying to address what happened.

But there’s lots of ways we can heal and access help.

I’ve grew up as a Christian all my life, and something I’m passionate about is making sure that the Church addresses mental health. It’s something I do in my own church. For me, my relationship with god has healed and helped me. It’s gave me a community of people who have stood by me during these dark circumstances and helped and enabled me to live and to continue putting one foot in front of the other.

I’m still trying to figure out how to be a high functioning person that struggles with anxiety and depression. It takes a lot of effort and extra work, but it’s a worthwhile journey.

I am happy to be in a place now where I can speak openly about mental health, and I can challenge and encourage and bolster others around me. I feel like we have been so failed by our own government, by the collapse of Stormont in Northern Ireland, by the lack of implementation of mental health schemes to the point where we have to take care of our own communities, which is why I am so passionate about sharing my story and my struggles.

Maybe people who have struggled in the same way can find healing and restoration through relating and through hearing what other people have been through as well.