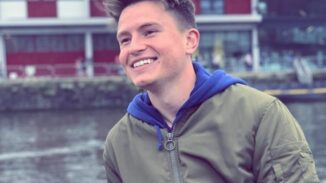 Know that you are strong and listen to your body because it always has something important to tell you.

My Type 1 Podcast: All 4 One My YouTube Channel JDRF Type 1 Charity

In 2015 I went into hospital with DKA, which is when your body starts to shut down after your blood sugar has been too high for too long. I’d just moved to a new city after University and I had just got my first job in TV so it was exciting but really intense. My workload was so huge and I was so stressed that I didn’t realise that I was getting ill. I tried to ignore how I was feeling because I was so determined to make the most of my opportunity and do as much TV as physically possible. But the reality was I was incredibly ill and incredibly diabetic (type 1) but I just didn’t realise the symptoms. The crazy thing is a close friend had recently been diagnosed with Type one Diabetes but even so I still didn’t notice the fact that I was getting ill.

The thing I remember the most about that period was the incredible thirst I had all the time. No matter how much I drank I just couldn’t get rid of the feeling that I was dehydrated. Since then I’ve had a fairly OK ride with Type one Diabetes, in the UK I’m very well looked after by the NHS and I’m very grateful of this. I’ve recently started using an insulin pump which has allowed me to start doing more exercise. My job is now (thankfully) more flexible meaning that I can get to appointments and adjust my days to cope with blood sugars that don’t want to cooperate.

I also now am and ambassador for JDRF, a Type one Diabetes charity, and I also create lots of online content spreading awareness including many YouTube videos and a podcast called All four One. This has helped me to connect with hundreds of people across the world living with the same condition as me and it’s really uplifting and encouraging.